I’m growling at myself because I’m not as prepared as I want to be, not as prepared as I should be for tomorrow. Voting is a right, responsibility and a privilege and I’ve just been too self-absorbed with school and my medical issues this year to be up to acceptable speed with state and local politics.

When I was in Michigan, I knew politics. I mean I knew what was going on in Lansing and who was doing it. I wasn’t a know-it-all politico, but I kept my brain on what was going on with the politicians who represented ME. When I was in Cable TV, I worked with a lot of politicians and commentators. Maybe that was cheating. I had an inside view of their views getting to see what they said off camera and how they said it. I knew what was rehearsed and what was from the heart, no matter how good their acting skills were.

I’ve been in Ohio for almost 4 years. I don’t know a whole lot more than I did in 2007 about our state. I have followed and/or researched the candidates for congress and I have a definite opinion in the gubernatorial election, but, to be honest, I’m not even sure what the Secretary of State DOES in Ohio. I just know it’s different than Michigan.

So, tomorrow, I’ll vote in the races for which I have an informed opinion. My goal for next year is that I will have good sources, and follow them to get to really know my state, county and city governments beyond who holds the “big seats.” I may be an Ohiogander, but my birth state notwithstanding, my identifier begins with Ohio. I’m going to try harder to earn that tax deduction we get for my tuition! 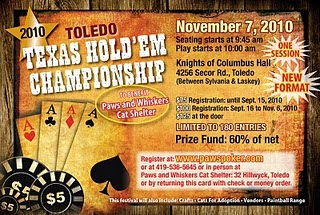 Sunday November 7 will be Paws Poker, Texas Hold ‘em to benefit Paws and Whiskers, the cat shelter that Carla came from. If you’re anywhere in driving distance of Toledo and want to play poker for a great cause, you should consider a Sunday drive to The Knights of Columbus Hall in Toledo. David has played in the Paws and Whiskers Tournament a couple of times and I’ve even played once. I actually got farther that I thought I would! The other players are pretty good about knowing that there are many players who are cat lovers first and poker players, well, some not at all. So it’s a fun day. There will be cats there too, so if you come with your more poker savvy significant other, you can visit with the purries if you get knocked out first. But remember, the tournament I went to, David was shocked that I wouldn’t be reading during the finals, but playing! (At least for a few more hands)

Visit Paws and Whiskers Paws Poker page for more info about the tournament and pre-registering to save a few dollars on the buy in!

Help Lacey have a Happy Thanksgiving 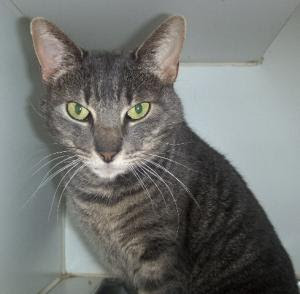 Lacey, the kitty we sponsored at Paws in June is still hoping the next human who comes in will be her Mommy or Daddy. It’s been a rough year for pets this year. Adoptions at the shelter are down and they are turning away people who have cats that need homes. There’s just not room.

I know last year, when we had to choose between “Sassy” and Shannon, Sassy is the cat who really sold herself to us and became our Carla. It was a rough first few weeks, but to be honest, as rattled as I remember being about it all and even thinking of sending Carla back, I reread the blog entries and my personal journal entries from that time and I honestly don’t think I really seemed that stressed. I’m so glad we didn’t give up on Carla or on Kaline's and Baggle’s ability to live with another cat. There are cat ways that are sometimes beyond what we mere humans can grasp!

When we adopted Carla, we sponsored Shannon too. Just before Thanksgiving I had a nice long cat talk on the phone with a Paws volunteer who called to let me know that Shannon had been adopted and would be at her new home for Thanksgiving! I was so happy! It was just under a month later that Shannon was going home!

Now, we’ve been Lacy’s sponsor for almost 5 months. I’m sad that such a sweet girl is still sleeping in a cage at night. I know that’s better than sleeping in the streets, being cold and always in danger from sickness, parasites, other animals, mean people and cars, but I look at Carla sleeping on the sofa and hear her loud purring when she cuddles between David and me and I wish it could be that way for all of the cats at Paws. Whether it’s a cat or dog, rescues are the most loving and loyal domestic companions there are. They remain bonded to the kind heart that takes them off the streets, out of the shelter cages and shares themselves and their home.

I read a sweet story in the Bronner’s Christmas catalog about tabby cats, like Kaline and Lacey. The legend of the tabby cat is that a tabby kitten jumped into the manger and cuddled the baby Jesus to warrm Him with its fur. Mary touched the kitten’s forehead to thank it and it formed the two darker open triangles on either side of the nose to make an M, Mary’s mark. The mark on the tabby on the ornament Bronner’s is selling is more pronounced with no lighter stripes in between but Kaline has that darker M marking and look at the picture, so does Lacey. Isn’t that a wonderful symbol to have in your home?

If you are in the Toledo area or know someone that is that would love to welcome a sweet Tabby girl to bless their home, consider Lacey!

Legend of the Tabby Cat Ornament at Bronner’s http://www.bronners.com/product/tabby-cat-glass-ornament/1145438
Posted by Nani at 6:17 PM

I hope she finds a home soon! I would fill the house if I could, lol, and bless you for caring! We adopted a new tabby just a couple of weeks before my father passed away (we did home care with Hospice for him). It was a rough couple of weeks, and I kept thinking that it was just the wrong time to have adopted a cat. However, as Dad's time was coming to a close, Misha (our new tabby) came running in to the bedroom, jumped into the bed, curled up with his head on Dad's chest and began purring. Dad passed away a few moments later, and Misha calmly got down and wandered off, leaving the nurse and I with the feeling that he was sent to us. Bless the strays.

Good morning my friend. Gosh, the poker games sound like fun, and what a great cause! My heart goes out to all animals in need of help or a home. If I could, I would bring them all home. I cringe to think of what might have happened to my Tootsie had I not found her. She has brought me through some really difficult spots.

Your Halloween sounds like the Halloweens that I remember as a child, and later as an adult. Where I live, there are no children coming around trick or treating, and in a way I do miss that. But then, there are parties in homes and stores that are organized to give the kids a safe and fun Halloween.

Tootsie and I will be getting ready to leave for her a.m. chemo in just a little bit here. You have a wonderful day.
Hugs, Edna B.