Half Century of Nani 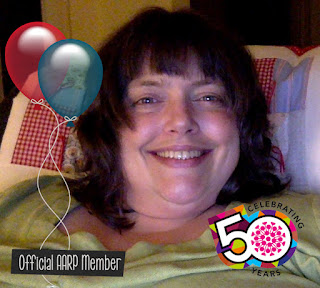 I am officially half-century old. Just to let you know I don't have a problem with being my age so I feel no need to refer to myself as "years young." Everybody has their own personal little idiosyncrasies. Some of mine include hating phrases like "it is what it is," or that someone is however many "years young." It just feels like the ultimate in denial. I have the half-century of history. I have so many personal even public victories to remember fondly and as many mistakes and failures I have learned from. I've celebrated triumphs and fought challenges and I'm proud of every bit of who I am. Heck, I now qualify as a classic, even an antique in some circles. That means I'm worth more old than I am young. Why would I want to deny that?

I was officially 50 on July 29. I met David at the Mud Hens game and it was raining when I went out to catch the bus. Folks, I didn't see any rain on my birthday at all until I was 24 years old. In 1990, my friend Jeff and I we're at midway airport in Chicago waiting for plane to take us home. I saw rain on my birthday for the first time that day. And that was enough rain to keep our plane from landing and leave us with a few extra hours at the airport while we waited for the rescheduled flight. The guy tending the beer cart came to know us pretty well that day. Jeff's parents had dropped us off and my parents were picking us up so we didn't have to worry at all about driving… Since that time I've seen rain on my birthday hit and miss, not enough the delay anything. I really figured on my half-century birthday it shouldn't rain, right? 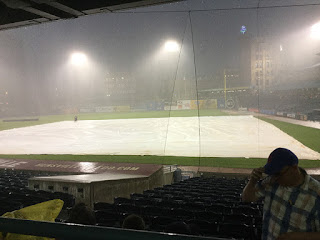 I tell you, it wasn't a drenching rain when I caught the bus and it had stopped raining by the time I got to the ballpark, but it WAS an absolute downpour that delayed the game for two hours at the start of the sixth inning! But the Mud Hens won and MY Tiger, JD Martinez, was my Mud Hen for my birthday! He was in Toledo on a rehab assignment. His first swing of the bat when he returned to Detroit a few days later was a home run that was the game-winning run. We'll just call that my birthday blessing. LOL

I did have a couple days of computer silence waiting for my "birthday present" from Apple. My power cord for my computer died. I mean it really died; I plugged it in and there was nothing. The battery died and the computer went dark while I was on the phone with AppleCare. It was a good thing I bought AppleCare insurance. The retail value on replacing the power source is $87! It died on a Sunday night and by Tuesday I had the replacement. All it cost me was two days of computer silence. I have my iPad and the TV; so, living in a swing state, I wasn't even away from politics for two days. Although no politics for 2 days might have been a present too.

Well, the couple days of computer silence did put me starting August behind on my page-a-day scrapbooking so I'm going to spend the rest of this pretty sunny afternoon catching up! Funny, 50 really doesn't feel any different than 49 did. Well, except that I joined AARP and I’m waiting for my card while looking for an appropriate coffee mug.
Posted by Nani at 5:51 PM 2 comments: