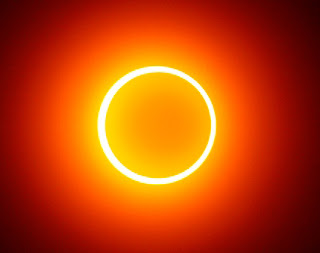 There will be a total eclipse this afternoon. Here in Toledo we won’t the see the full effect of the total eclipse. The nearest place in the path of totality is between Knoxville and Chattanooga, Tennessee. They’ll be in total darkness briefly this afternoon. We'll be just kind of dark.

A total eclipse is when the moon is close enough to the earth to appear bigger and completely block the sun. In May 1994, it was an annular eclipse that was the last time an eclipse that was visible in Ohio or Michigan, where I was in 1994. For an annular eclipse, the moon is farther. away and appears smaller, so a ring of sun is larger around the moon. Asking my husband about something he knows more about than I do because I'm only interested in when it's a current event, gets you an exasperated sigh like I'm sure I got from my mom in 1973.

When we started talking about the solar eclipse this year I had a memory flash. There was an eclipse on January 4, 1973, just after Christmas break, but the patch where it was visible was in southern South America. But there has been talk about it on the news and my classmates and i were in second grade. I remembered just after lunch, a boy in our class got up and closed all the window blinds so no one would look out at the eclipse and go blind. It seemed like s nice thing to me at 7, to protect the whole class from the eclipse seen in South America.

A good test for checking your eclipse glasses is look at a florescent light with your glasses on. If you can't see the light, The sun won’t blind you. If you’re in an area where you can see the eclipse, experience with care and enjoy!
Posted by Nani at 6:27 AM 4 comments: