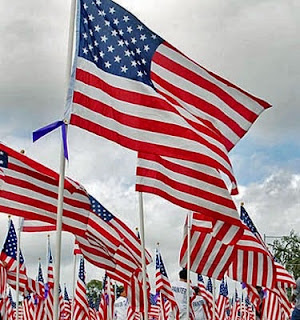 Remember with a prayer or grateful thought today those who have given their lives in service of our nation. We don’t always have to agree with the motives of our government, but the men and women who have answered the call by desire or requirement at their time of service have represented you and me with courage and dignity.
Posted by Nani at 11:26 AM 2 comments:

I haven’t updated in a while but I’m not going to write a “bring the blog up to speed” post either. I haven’t written because it’s been a rough month and If I can’t say anything nice… Suffice to say things are getting better.

Weight Watchers is all about accountability but the focus is on balance and portions, not sacrifice. I know when we have spaghetti it’s going to be 12 points for dinner plus a salad, which is 2 additional points for a serving of balsamic vinaigrette and croutons. I don’t make “light” spaghetti or tell myself I can’t have it, I just plan to have 14 points for dinner. I think my greatest weakness in sweets and pastries is donuts and the easiest guarantee an eating plan won’t work for me is to tell me I can’t ever have a donut again. 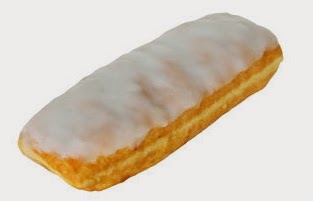 My first job was when I was 16. I worked at a deli/Italian store until I was 18. Senior coworker, Jill, and I opened the store on Sundays. Part of the early Sunday was that a large tray of donuts came in that was sold form the glass case on the front counter. That tray always included two white-frosted crème-filled long johns. The customers had no idea that we ever had white-frosted crème-filled long johns to sell because the truth is we didn’t. Those 2 donuts NEVER made it to the case where the donuts were displayed on Sundays. If I brought the tray in when it arrived I took them off. If Jill brought the tray in, she took them off. Once we had everything set up for the first morning rush after church, there was about a half hour before that rush started and Jill and I got a donut break. It was always the white-frosted crème-filled donuts. They were NOT custard. They were crème-filled; just sugar and fat, the way donuts are meant to be.

32 years later those are still one of my absolute favorite donuts. They were the donuts Grandma always made sure were in the Thanksgiving donut box because she knew that was my guilty pleasure and that is the donut I get from Kroger as my treat after grocery shopping. They are 9 Weight Watchers points and worth every one of them to me. It’s a beloved donut that I like and it makes me think if the special treats Grandma made sure I had Thanksgiving morning and it makes me remember Jill and that special treat we shared on Sunday mornings. 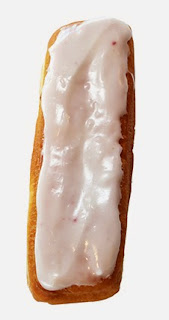 Every 2 weeks when I go to the grocery store I plan my trip to get the most of the allowed bags to bring back on the bus, the most of the money spent for my groceries and the most of the energy to do my shopping. I also plan the most of my breakfast points with a coffee and a donut reward for my careful planning when I get home. I’ve found that even at Kroger, where they have trays of those wonderful donuts that take me back, if I don’t go early, the white-frosted crème-filled long johns will be empty trays. 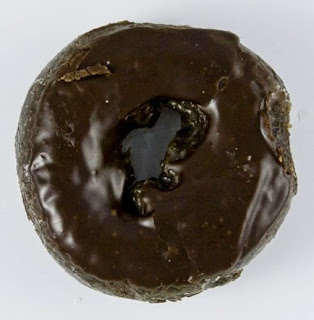 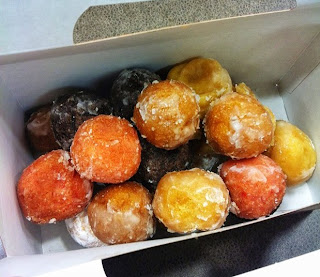 Now, truth be told, I usually consider Tim Horton’s donuts to be the best. I love their walnut crunch donuts and give me a box of Tim Bits in the wide variety of glazed cake donut holes and crullers and it needs to be a small box because there is a danger that no matter how big I’ll finish the whole thing. I did say I had a donut weakness. But the one Tim Horton’s donut I find disappointing is their double chocolate frosted. There is no glaze on the chocolate donut, just frosting. I’ve seen or had the double chocolate donuts that have no glaze on the donut, even one from a Dunkin Donuts franchise! WHAT is that all about? Is it supposed to represent a healthier donut because it cuts down on the sugar? Really? We’re talking about a donut, not a granola bar. What part of FRIED DOUGH are we trying to make healthy? 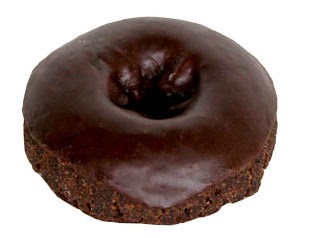 Not healthy; just a dried out donut under the frosting

I don’t know one person, not one, who has ever eaten a donut and called it part of a healthy food plan. A donut is a treat. It’s one of the important every now and then things that keeps other food decisions in a healthy balance. But a donut is sugar and fat with maybe another thing added with very pungent flavor, like a serious fudge frosting, a total nut coating or a strong cinnamon to complement the sweet but flavor-consuming base. Donuts are supposed to be sweet and fattening if overeaten and just yummy with no concessions made to the health nuts du jour. If you want a totally healthy sweet snack, have fruit but if you’re selling a double chocolate frosted donut, rest assured no one is looking for any calorie-cutting and glaze the thing before you frost it! 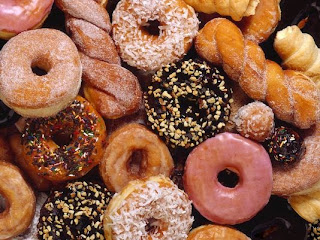 National Donut Day is Friday, June 5, 2015. What is your favorite donut?? Will you make a point of indulging that day?
Posted by Nani at 4:34 PM 3 comments: