Back in June, when the power chair was new, I fell asleep in it. I’d been having trouble sleeping and David let me be for the night. The chair reclines all the way back, tilts up and the feet lift. It’s almost totally flat and in the right position can be pretty comfy. After a few nights of MS insomnia, it was a deep and restful sleep, aaaaahhhhh. I fell asleep with Buddy Bat, my iPad, on my chest, which eventually slid off of me. I vaguely remembered feeling it slide to my stomach and down my legs. I knew I’d have to upright the chair and fish it off the ground with my reacher.

I moved the back of the chair upright and grabbed the reacher. Then I started moving the leg supports down, “woooo…ooo…ooo…CRUNCH!” I immediately stopped the chair. The motor doesn’t go “crunch.” Buddy Bat didn’t fall to the floor. Buddy Bat slid onto the working parts of the joints in the chair. 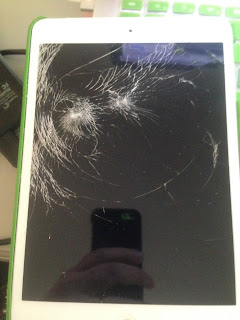 I’m pretty dependent on my tablet. It’s my library and my game console. I have an app with all my medicines that automatically searches for potential drug interactions when I add a new one. My calendar is in it, my daily journals, notes for my doctors and even my grocery list app! Keep in mind that I really can’t write legibly or turn pages while not dropping a paperback. My tablet really has become my most important assistive device for daily living!

So Buddy Bat had to be fixed or replaced. The tablet worked fine, every app, and swiping across the screen accessed everything although half he screen was a bit difficult to read. Also, every time I swiped the screen I got tiny shards of glass on my finger. My replacement insurance expired back in April and it couldn't be renewed anymore because they don’t make the iPad 2.0 anymore. But I was able to update to the 4.0, faster and more memory, for less than I paid for the original one. That my friends, is the silver lining. There is always one of those if you look for it. 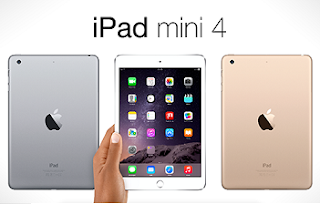 The New Buddy Bat is the gold one!

So I had to move in to the new tablet. Much of my stuff was available from the cloud. Every app I’d downloaded and my music library was transferred with my sign-in. I imagine that’s the same with any tablet or smart phone, that you sign in to whichever store you download apps from an you can download he apps you use on your other devices. The apple apps had the info and setups as I was used to, my calendar was intact and I had my notes, but some of the non-apple apps had to have the info put back in. Mainly, I had to re-enter all of my medications in my Rx app. I also had to re-train Siri. You know, I had to remind her that David is my husband and “Lee” is who I mean when I say “message Pop .”

I also had to give her the alternate spelling of my name. Siri looks at my name and pronounces it “Nanny.” My nickname is pronounced like the Hawaiian word for beautiful or the Japanese word for huh? But Siri is neither Hawaiian nor Japanese!

Back when I was a teenager, there was a talking computer at the pizza place we used to hang out at. It was Showbiz Pizza, which was a knockoff of Chuck E. Cheese with a little better pizza and a bear named Billy Bob. The little kids weren’t into the talking computer so much, but we teens were! Remember, it was the early 80s. Typing a sentence and hearing the computer voice read it back was a cool new thing that you didn’t get to do at home. Of course we wanted to hear it try to pronounce our names. But we found out the when you typed any profanity the computer said “Billy Bob can’t say that.” We were good kids that hung out at family restaurants, got along fine with parents and played video games with the kids. But we were still teenagers. It became our mission to figure out how to make the computer swear!

We tried just typing a few lines of random letters with the profanity in the middle, like “jdkifnxyskmassholejfdikjkn” The computer voice sounded like it was mumbling with a mouthful of marbles and flow right into “Billy Bob can’t say that” and continue to mumble. We laughed at each failure, as did the preteens who weren’t waiting to use the machine but just waiting for us to win. We finally discovered that phonetics, dashes and spaces worked. Yes, honor roll students and early PCs made for the discovery of the likes of sh-it, you beech and what made us preteen heroes for a while, if you use ah sandwiched between the f and k in a single word, it sounds just like a soft u. Every time the computer swore we laughed and cheered and the preteens took notes.

I used this trick to teach my first Mac how to say my name in 1997. Nah-knee, but when I changed my name in the first iPad, Siri said “nah” with a harder a, like ant. See our devices don't have computer sounding voices anymore. Siri is an actual person’s voice with sounds formed on an algorithm that works with a script of normal sounds. Siri and I had a talk about pronouncing my name and she decided to spell it “Nonny.”

It kinda makes me wonder if today’s text slang comes from smart phones telling teenagers how to swear.

My signature for July at GingerScraps

Long time no see, right? I got my new wheelchair just a little after Memorial Day. If anyone wants to grouch along with me, that’s just over a year after I was originally measured and an order put together for a new chair. But I have the new chair. Now I’m about the task of relearning how to have an actual life. That’s kept me busy and tired every day.

My phrase for the beginning of my 50th year is “baby steps.” My friend and former coworker, Mary, put that gentle and valuable bit of coaching in my head when we worked together. You don’t reach goals if you can’t appreciate the little victories. At that time it was just her telling us to take it easy if we felt frustration at work, but now when I sarcastically cheer myself because I made my own salad, I hear her voice in my mind and, with a smile, I do recognize the little victories. I might not walk, but I’m gonna rock that chair and what are the little victories now will be everyday no big deals.

Before I sign off, I’ll share the scrap-page I did for last year when the van we call “The Blue Meanie” came home. Right now it means David and I can go places to photograph trains, see baseball games or even visit my dad in the Motherland! 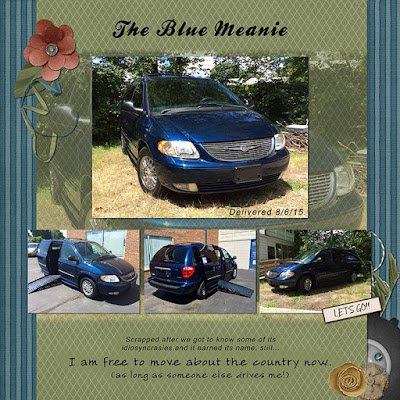 
Of course “template by Digitalegacies Designs” means a freebie! Call it my reopening of my cyber coffee shop gift. Click on the preview to download the template at Mediafire.

Thanks for visiting again!! 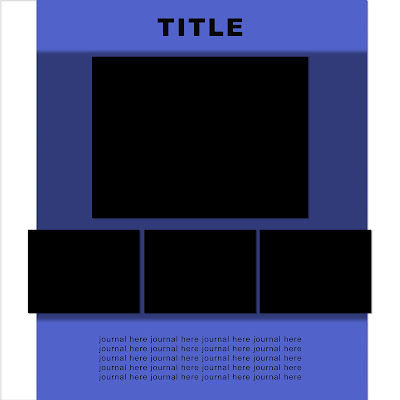