This is my signature GingerScraps for this month:

A couple of nights ago, after not having been hungry for dinner finally feeling hungry at 2 o'clock in the morning I decided, to go through my jar of candy and see if there was anything that sounded good to replace dinner.

Now of course, I'm a Chocovore. Okay that's the term that was created by Krave cereal when it came out to promote that it has real chocolate inside of it. I decided to adopt that as the reality of my style of eating because chocoholic makes it sound like it's a problem. I'm a very proud Chocovore!

If you've read some of my recent blogs, you know that November was pretty much a crappy month for me. I mean seriously, MS makes things heal slower than normal. So I have to deal with the opioid paranoid government saying I can't have painkillers for more than a month because broken feet should be healed by then, regardless of what my doctor says when she knows that because of my disease it will take two or three months for my feet to truly heal. So there's the general me angry with the government because someone who's actually in pain isn't allowed to have painkillers. So getting around that my CNP (my doctor is a certified nurse practitioner) increased my tramadol at least for the next couple months from the five a month, which is actually that I take three and have 2 that I can use if needed, and increased it to the maximum dosage of eight a day to take 2 every six hours. Now that the pesky government is out-of-the-way , so the ever so brilliant health insurance steps in and says I can't have that many tramadol right now because I've already been given enough tramadol to have 8 day. That doesn't really work because I used PillPack pharmacy and the tramadol isn't in a bottle but it's in separate packs over the course of the day. So I've had to rip apart a week’s worth of pills to steal the tramadol to and the right amount to packets that already have it in it and when the insurance company is okay with them sending me a bottle of extra tramadol to last until the end of the month I'm going to have to figure out how to reassemble the packs I've had to tear apart.

So right now my bad mood can be attributed to the government that doesn't allow people in pain who really need painkillers to have them while there are emails that come in all the time letting addicts find it whenever they want it. The insurance company who has my brain that's already jumbled from all of the painkillers I took last month having to organize how to disassemble my perfectly assembled pills they come in every month. (at least PillPack was allowed to ship the extra tramadol on Friday so I might have it by Monday which should probably only screwup a weeks worth of prepackaged pills.) I'm also angry because MS has got my feet so screwed up that I can't even place them on the floor trying to adjust myself in the recliner without a great deal of pain. Also my feet are still swollen and bruised. I have aides who come in 4 or 5 hours while David is at work. But David does work at least a good 8 hours plus lunch and drive time and if he is at an early meeting he somehow never gets to come home early when he starts early.

Now the last couple nights he's been at the casino in a poker tournament. I'm not really complaining when he is it doing successfully playing poker, but the more successful he is at playing poker more time I'm sitting at home alone and in pain. When it comes right down to it December started with me still as miserable as I was since the sixth of November when I fell broke bones in both my feet. I also bruised and cramped one knee and knocked one of the bulging discs in my back the back so that I've been receiving sciatic nerve problems every time I move back. I'm still in pain from all of that stuff because MS listens to the government and the insurance company and laughs at them hysterically. 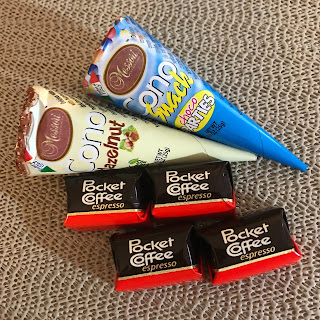 What the king brought his broken little princess

So now the piece of candy and how it changed my holiday mood for the better… I hope at least for the rest of the month. I pulled out of the candy jar a couple of nights ago because I wasn't hungry at dinner and got hungry ate about 2 AM. I pulled out a couple of Mr. Goodbar miniatures because Mr. Goodbar has been my favorite candy since I was a child and I figured my inner child could use the chocolate comfort food. I also pulled out of couple of Tootsie Rolls, because I just like Tootsie Rolls. But I found one of the two Pocket Coffees left that my dad brought when he stopped over on his way home from doing a construction project with my brother over the weekend. After a hug and a kiss that I desperately needed, he brought lunch that we shared and he brought me chocolate including Pocket Coffee, which is one of my favorite candies as an adult. I set the Pocket Coffee on the armrest of the recliner while I ate the two mini Mr. Goodbars and I began to cry. No matter what and no matter how bad things are, I can still say without a doubt, that I am loved. I think I needed reassurance of that lately. My dad made a point of stopping to comfort his little princess. I think the candy made me cry because it reminded me that I really am still his little princess I needed to remember that. No matter how lonely I may feels sometimes, there are still plenty of people who love me. I am not alone. I am loved.(Just a little bit of a pain in the foot right now)

I collected a bunch of pictures from Christmases in the past and used Aprilisa's Winter Magic kit and created trhe signature, that included one of the photographs I took of that precious Pocket Coffee. I created the signature that made be happy, that made me smile.
Posted by Nani at 9:14 AM 1 comment:

There's been a lot of unhappy and perplexing going on in Naniland. Oh, it's Nothing to worry about.

Have I bragged about my niece, Tori, who finished her masters last June in psychology? I am so proud of her and it is such an important and noble profession. I can honestly say the incredible relationship I have with my dad now has everything to do with the counseling place that helped me when I went to it for a few month after school. I can also say seeing a psychologist a while after being diagnosed with MS kept me from being clinically depressed. So I guess what I’m saying is if you’re having any sort of personal problems, things you are even nervous talking to with your best friend, psychologists can save your life, or rather they can show you how to save your own life. Most health insurances cover talking to a professional and there is absolutely NOTHING to be ashamed of in seeking help. Actually it's quite more something to be proud of. It's making your problems your solution.

I’m kind of in that kind of funk right now for many reasons. I’m gonna be meeting with a social worker, who happens to also be a psychologist. I have some pretty big issues that need fixed. And I am openly admitting I'm going to get help because that's what strong people do.

So this week’s songs are not from my general library. They're from a playlist that sort of reflects things that are going on in my brain right now. The playlist doesn't have a title because right now I feel a bit untitled.
.


While going through my general funk, I've been reading some of my old journals. When that last song, Who's Crying Now by Journey came on it really reminded me of something sad about my old journals. I used to keep journals written when I was in high school. That's when I started having my occasional not able to sleep and I stayed up all night listening to the radio while writing in my journals. Sometimes it was funny stuff, sometimes it was things that frustrated me. I think back in high school is when I realized when something was bothering me if I wrote about it and just kept writing until the problem presented itself, the real problem, I could solve it. That's something that I've always done. 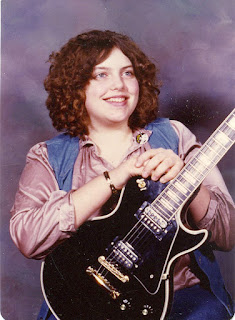 Sadly, in my 20s, I decided silly things that I'd written when I was in high school were a dumb thing to keep and I threw them all away. I'm 52 now and I'd love to go back and read some of those things that went through my mind when I was a teenager. So note to any teens that read this - don't throw things away that are a piece of you, no matter how silly or painful a piece of you, you think they are, because in years to come you'll wish you had them. Whether it’s to show you how far you’ve come, remind you how strong you were and still could be, or just to remind yourself about the great person you've always been. It's a lot easier now because you can put it all in a digital folder.


Where this particular song really brought out that said memory was because I remember the first time that I heard the song. It came out in July of 1981, which means it wasn't a school night-yay for me on that one, right? But I remember the Journal with the green cardboard cover but all handwritten and I remember talking about Journey's new song and how awesome it was. And just to be silly now, what really made me think about it was hearing the guitar solo at the end and actually writing something like “wha, wha-wha, wha-wha, wha-whaaah … SO COOL!"

Such a silly direct line to remember, huh? But it made me smile.

So here's a fun know. The video is the song with the album cover because no actual video was produced for this song I could find or remember seeing. Why bother? The song came out in July 1981. MTV didn't exist until August 1, 1981. Can you imagine putting out a single and no video today?